From Ethiopia to Indy

Posted on October 14, 2014 by Anthony Armstrong

Ethiopia to Indiana. Taxi Driver to Restaurateur. You’re right; doesn’t quite seem the most logical, but that’s just what you’ll find on the west side of Indianapolis. 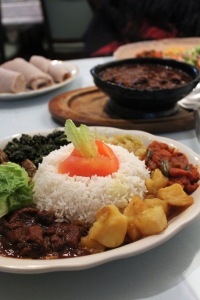 Nestled within an unassuming strip mall on west 38th street, you’ll find Abyssinia, and owner/chef Abraha Belachew. The Indy’s west side has been noted in becoming a clearing house of many ethnic and cultural based establishments and Abyssinia has been one of the originals serving authentic Ethiopian based cuisine since 2003.

Abraha a native of Ethiopia, fled with his family, as a refugee, to neighboring Sudan to escape his countries inner political turmoil and unrest. Originally arriving to the United States, via San Diego, to live with a cousin in 1988, he made his way to Indianapolis in 1996. While a taxi driver he fell in love with the area, its people and soon the location in which he wanted to open a restaurant. “No experience at all” he stated but untraditionally for his culture, his mother, enjoyed his cooking. Growing up, it was very uncommon for men to cook in the family. Much of his experience came from observing others cooking. Now he relies on past experiences and his own interpretations of Ethiopian cuisine.

Abyssinia, which in loose translation, is an ancient name of Ethiopia, has been, over the years, a true labor of love and commitment. A mom and pop in every sense of the phrase, his wife, who was back in Ethiopia visiting family, when I visited, makes their traditional flat bread, Injera, every night. Their daughter, a six year U.S. military veteran, has also served as hostess and server.

The interior of the restaurant is dimly lit and cozy, with most tables positioned close to one another. Posters of Ethiopian landmarks dot the walls while there’s a faint aroma of spice and roasted coffee beans. On my visit, during mid-week, there were a few guest scattered about. Diversity has been very important to Abraha and Abyssinia’s success. A frequent dining spot of many international college students, professors and doctors, all have led to a tremendous word of mouth following, within his own community and beyond. When not in the kitchen, you will find Abraha, personally greeting guest, friends, offering traditional honey wine, they make in house, or helping guest select from his vast menu. Whether dining on glass topped tables or from traditional basket weaved tables called, Mesob, family and friends are the focus and one of the main reasons why he enjoys having Abyssinia. Communal dining is a must and remember, eating with your right hand only, is a cultural tradition but forks are provided for us westerners.

The Food: African cuisine has been at the root of many American trends and cooking. From low country, in the Carolinas, to Creole in Louisiana. At Abyssinia, you’ll find many recognizable ingredients prepared in some very traditional methods. Abraha provided me a sampling of some his stable items including, Gommen Besiga, braised collard greens and Tikel Gome, stewed cabbage and carrots. While serving a vast patronage of vegetarians, beef, lamb and goat are at the forefront to many of his dishes. Siga Wett, braised beef tips, in a paprika laced sauce, (you can ask for REAL spicy) were and have been a favorite of mine. Stewed goat, steamed rice and turmeric spiced potatoes were also on my sampler plate; and all had a wonderful mix of earthiness and spice. Always ask for the traditional tea service that finishes your meal. Be prepared for a very hot but wonderfully soothing mint and fruit scented tea. When first arriving to Indianapolis, Abraha relied on fellow local Ethiopians to provide many of his native herbs and spices for his restaurant. Now, through his own successes, he currently provides many of those same individuals and much of the Indianapolis area with goods he sources directly from Ethiopia.

A true chef of farm to table and buying local, Abraha, personally visits and selects every cow, lamb and goat that he serves in the restaurant. He oversees each livestock purchase, follows during its butchering and packing, to insure both quality of the product and that it has been handled humanely and within cultural parameters. Now that’s knowing where your product come from!

If you appreciate good food, a warm environment and some of the friendliest people you’ll ever meet, then Drive, Stop and Eat to, Abyssinia.

2 Responses to From Ethiopia to Indy